A popular and useful framework for contrastive self-supervised learning known as SimCLR was introduced by Chen et. al.. The framework simplifies previous contrastive methods to self-supervised learning, and at the time was state-of-the-art at unsupervised image representation learning. The main simplification lies in the fact that SimCLR requires no specialised modules or additions to the architecture such as memory banks.

As with previous contrastive methods, the architecture is a Siamese-like, as can be seen below: 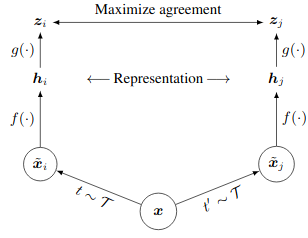 where \(\tau\) is the temperature, \(N\) is the minibatch size, and \(\text{sim}\) is the cosine similarity. With this loss, all pairs of examples in a minibatch are treated as negative examples, except for the single pair \(z_i, z_j\). This loss function works well in practise, but typically requires very large batch sizes to be effective.

Note that this is architecture and loss function are fully unsupervised.

The augmentations applied during training are 1. random cropping and resizing, 2. random colour distortions (in the form of brightness, hue, saturation, and contrast jitter), and 3. random Gaussian blurring. It should be noted that, for SimCLR, random cropping and colour jittering are crucial for good performance.

Although SimCLR works well, there are a few drawbacks. Firstly, the computation needed to train the architecture to an acceptable level can be prohibitive. The batch size using in the paper is 4096 which means 8192 images are in each the batch for each training iterations.